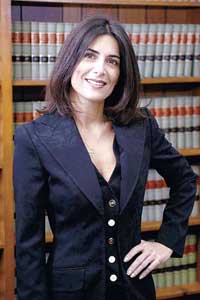 Attorney Rosemarie Arnold has been designated as a “Super Lawyer” by “Super Lawyers” magazine for every year of its publication – for the past 11 years running, from 2005 through 2015:

A self-described “slumdog millionaire” who grew up in Manhattan’s Washington Heights neighborhood to become one of the top personal injury attorneys in New Jersey, Saddle River Board of Education member Rosemarie Arnold is used to multitasking.

As the head of two firms comprised of 13 lawyers and 40 employees, Arnold has been named by New Jersey Super Lawyers magazine as one of the top 100 attorneys in the state every year since the listings began in 2003. A single mother of two Wandell children, Arnold has appeared on multiple television networks such as Fox News and MSNBC, delivering legal analysis over the past several years and, perhaps most notably, represented Joran van der Sloot in his civil case against the family of Natalee Holloway.

For Town Journal, Arnold described the beginnings of her 23-year career, the experience of being a talking head on TV and what she brings to the school board as a member serving in her second term.

Q: What made you interested in becoming an attorney?

Q: When did you decide you wanted to practice personal injury law?

A: I got out of law school and I got a job with Christian Steuben’s office, because it was a Fort Lee address and that’s where I lived. I took the job to get my feet wet, and I was doing personal injury defense work, and that’s when I decided I actually wanted to be a lawyer representing the victims who got hurt. My job was to deprive them of their money, but my heart wasn’t there. My heart was to get them the money, because I always had a compassion for humans, so I flipped to the other side and opened up my own firm.

Q: How many cases do you manage at a time now?

A: I oversee 1,000 pending cases, along with the managing partner in this firm, Sheri Breen, who is my second in command. I handle probably about 25 of my own, the top 25.

A: They’re worth the most money. They’re the most difficult and complex.

Q: Do you find it difficult to manage all of that?

A: No. I find it challenging to manage all of that and be a good mother to my two little girls, but I think I live up to the challenge.

Q: How did you come to represent Joran Van Der Sloot in the Natalee Holloway case?

A: My partner in New York City is Joe Saccopina, and he’s a high-profile criminal attorney. Joran found him on the Internet, from Aruba, and asked him if he could represent him in New York in a civil case that was being filed against him by Beth Holloway. It was a wrongful death case that was filed against him, and I got involved in that because I’m the civil attorney in our firm.

A: I don’t know what he’s like now, but when I represented him, he was a devoted student, a respectable son and a confused teenager. I’ve read that he’s changed since then, and he’s done some things I wouldn’t condone. Unfortunately for him, his personality became the boy that was accused of killing Natalee Holloway. Eventually, there was no evidence that he had harmed her in any way.

Q: How many times have you appeared on TV?

Q: Is it becoming old hat by now or is it still pretty cool?

A: I enjoy sharing my legal knowledge and experiences with everyone. Most of the TV appearances that I do have to do with cases I’m involved in. But sometimes I’m called in as an expert to comment on other cases.

Q: Do you get nervous before appearing on a national show?

A: No, but I’m much more comfortable talking about my own cases than commenting on other people’s cases.

Q: What compels you to serve on the school board?

A: I’m a public school-educated person, and I believe in the quality of education in our town. I think I bring something extra as a board of education member having a license to practice law, because there are a lot of legal issues that face the board on a daily basis. While I’m not the board’s attorney and I never act as the board’s attorney, I think like a lawyer because I am one. 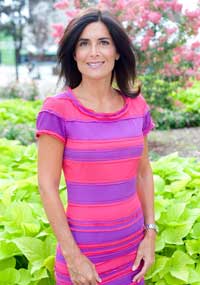 On a warm July afternoon, I stroll into Sagg Main Store in Sagaponack to grab a sandwich. At the counter, like a shameless gawking school boy, I notice a casually-attired, gorgeous, petite, tan brunette, with a lean, well-toned figure, taut legs, and a posture which suggests a serious fitness regimen. As she places her order for three egg white, bacon and cheese sandwiches, instantly, I recognize the voice and realize it is none other than Super Lawyer and super mom, Rosemarie Arnold, the tireless trial lawyer and victim’s rights advocate.

I met Rosemarie back in the mid 1990’s while I was in the legal headhunting business. There was a buzz about a brilliant trial lawyer in New Jersey who was building a huge reputation for herself and getting multi-million dollar verdicts on cases other lawyers rejected or were too weak in the knees to take to trial. Arnold had emerged as a veritable plaintiff’s prophet or the patron saint of the underdog. Since then, she has developed a reputation as a “courtroom bulldog who won’t be leashed.”

It is rare to catch a free moment with the woman behind the Law Offices of Rosemarie Arnold, the largest personal injury & victim’s rights practices in Bergen County. The “Queen of Torts” now leads a team of experienced trial attorneys and legal staff who offer the same personalized legal representation that Rosemarie became famous for, to families and individuals throughout the tri-state area. Arnold’s highly-referred law firm offers an effective voice to victims of serious accidents, sexual assault, and discrimination in the workplace involving age, race, sex, disability, national origin or religious bias. When the Certified Trial Attorney is not tending to her prolific and high profile case load or serving as a super mom at home, Rosemarie is a sought-out legal expert who has been solicited to offer her expertise to various media outlets including the New York Times, New York Post, and Newsday as well as NBC News, CBS News, Fox News, The Today Show, and a Current Affair.

Arnold’s climb to the top of the legal profession had rather humble beginnings. Her father, who was a physician, passed away when she was five. Her mother, who was a teacher in the New York City public school system, raised 6 kids in a two-bedroom tenement with one bathroom in the Washington Heights section of Manhattan. While she may have the mental DNA for success, she is a self-made woman of the highest order, whose reputation was built the old-fashioned way: dogged work serving the interests of one client at a time, and a relentless commitment to honing all elements of her craft. It is rare to find a lawyer so proficient, with such a strong and disciplined work ethic, a Zen-like strategic sense who is also filled with such compassion, professionalism, and understanding. How do I know? Simply put, she has represented me and those close to me with the greatest degree of care and proficiency. Ask Rosemarie about her impeccable standing with her clients, judges, legal experts, and the reverence she has from her adversaries. ”We brag about the client’s satisfaction, not the successful verdicts or privately negotiated settlements.” To her clients, she is the irreplaceable equivalent of having Socrates, Clarence Darrow, and Mother Theresa in a suit. Yes, she is that good.

Rosemarie has a tremendous sense of humor. In that regard, and as evidence that she does not take herself too seriously, she has a commercial running on NY1 starring 77-year-old identical twins, Iris and Fran, who happen to be her mother and aunt. In addition, one of her firm’s many URLs is suethesleazebag.com.

We start talking about success, the type of success that allows you to spend your summers on Sagg Pond Court in Sagaponack. I ask her what is the key to her success. “My life is fruitful and fulfilling. I give unconditional love to those who mean anything to me. I give that same love to my craft and my clients.” The woman who is writing a book entitled “Sue Unto Others” adds that “understanding your adversary’s perspective is critical to the amicable resolution of a case. If a reasonable resolution does not happen, you are better prepared to go for the jugular and dismantle your opponent.”

After that final nugget, Rosemarie jumps onto her Specialized S-Works Roubaix bicycle to bring egg white sandwiches to her children on the beach. As she notices me admiring her perfectly-toned Jewess form before pulling away, she reminds me that she deserves her ageless fitness-model form because she rides at least 20-25 miles per day and takes notes from a mutual friend, Dr. Mehmet Oz, for whose Health Corps Annual Gala she usually serves as a dinner chair.

DISCLAIMER: The information you obtain at this site is not, nor is it intended to be, legal advice. You should consult an attorney for advice regarding your individual situation. The Law Offices of Rosemarie Arnold invites you to contact us and welcomes your calls, letters and electronic mail. Contacting us does not create an attorney-client relationship. Please do not send any confidential information to us until such time as an attorney-client relationship has been established.